Comfortable in My Skin

When I took my first Bikram Yoga Class, I was 22 years old. I was a landscaper by day and a heavy drinker by night. I paired my Budweisers each day with at least one dozen American Spirits, if not two. My job was hard on my body and my best friend and I relaxed at the end of the day with some well-deserved brews.

After my first class, I felt amazing. The class itself was hard and uncomfortable, but after I felt light and happy. At the time, I didn’t know anything about the “yoga high” or what was happening in my body.

I felt amazing, but had the perfect excuse not to return. I was too young to need this type of yoga.  It was hard and I was uncomfortable for several hours out of the day.  Yes, it’s only a 90-minute class, but I suffered from severe anxiety. I was uncomfortable from the moment I agreed to go until I was leaving the parking lot.

‍I have lived my whole life uncomfortable in my own skin.

‍So I quit. It took me five years to get back on the mat again.  At this point in my life, was no longer drinking, but still smoked a pack a day.  I started out small, going to class a couple of times a week.  The classes were still as hard as I remembered, but I had lost the bloat that comes from drinking a six pack of tall boys a night and that made the classes more tolerable.  My lungs burned in class, but not enough to keep me from craving that all-too-welcoming post-yoga smoke.

When we got a positive pregnancy test, I finally gave up the smokes. My daughter wasn’t going to grow up in a house with a smoker. Unfortunately, I also gave up the yoga. I wish I had known then what I know now about how yoga eases the effects of withdrawals physiologically, emotionally, and mentally.

I spent six years without drinking before deciding when my second child was two that my earlier struggles with drinking were probably just from being young and immature. I couldn’t handle my drinking before, but now I’d be able to cope and limit myself and control the types of behaviors that led me to quit in my early twenties.

I was a social worker, stressed to the max. Within a year, I was back drinking another six-pack most days and taking my stress out on everyone around me. I was so stressed that I needed a beer to relax. The ironic part is that the alcohol always made my anxiety worse.

I was right back to that old, ingrained, fight-or-flight behavior. I knew something had to give. My wife had given up telling me that she knew something that really would help with my stress, but I wasn’t going to practice yoga when I couldn’t get to class every day.

I was miserable and the stakes only kept getting higher at my job. I made the choice to leave my high-stress, unpredictable job and attend yoga teacher training. This scared me to death. I couldn’t talk in front of two people, answer the phone at my house, or make an appointment for myself. Forget about standing on a podium and teaching yoga to a large group of people. Somewhere, I found the courage to go anyway.

I went to training and the question that played in my mind over and over again throughout those 99 classes surprised me. The question wasn’t whether I’d be able to teach; it was whether I’d be strong enough to keep up the sobriety that I’d sustained for two months when I got out of Yoga Hell.  I had this underlying pull telling me it was time to give it all up, but I wasn’t ready.  I continued to drink for another two years after graduating from teacher training.

What would it take to give up my crutch that didn’t actually help me?  I’m ashamed to say it took getting drunk, acting belligerent, and having my little girl ask me over and over on a car ride home from a birthday party, “Daddy, are you okay?  What’s wrong, Daddy? Daddy, are you okay?”  I was scaring and confusing one of the most important people in my life.

‍I woke up the next morning and remembered everything that had happened the night before. I told her never ever would I act that way again. It has been my intention from that point forward that she would not grow up in a household where she was on edge, where life was unpredictable, where secrets were held, and shame was the underlying feeling for the person that was her role model.

‍I am sober. Sobriety has changed my life.

I had gotten sober before, with the support of my wife. I thought I could do it on my own again and for the first year, I did.

When we started the Sober Yogis program, I had a nagging feeling that I was going to have to do it. As I listened to each person speak, I made the decision not just to be a teacher, but to be a participant. Sober Yogis was the support system I didn’t know I needed. It changed the way I view myself as a sober person.

My sobriety was enhanced by knowing that I’m not alone in this plight to be sober.  In fact, it doesn’t even feel like a plight any more. I’m sober. This is who I am and I’m so proud of it.  I have a life where I feel good in my skin. I’ve come to realize through yoga that life is lived when we can go through moments of discomfort great and small and not suppress them with drugs, food, or alcohol. I can feel extremely happy, down in the dumps, anxious as all hell and just ride the feeling through.

For me, being sober, just like being a drinker, it is a choice.  As a fellow sober yogi once said, “I can have that hell back any time I want it.” Sobriety is a choice to be strong, a choice to be okay with feeling uncomfortable, it’s a choice to be in control, and it’s a truly powerful decision.

My daughter says to me all of the time, “I saved your life, didn’t I, Daddy?”  She knows I quit smoking and drinking to be a better dad to her and Judah.  Yes, Bella did save my life, but Sara saved my soul by bringing Sober Yogis to me.

Never in my wildest dreams did I imagine I could live a life of happiness in my skin. Yet here I am: living the dream. 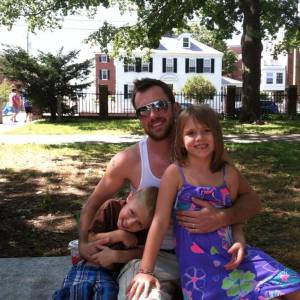